Telford & Wrekin Council and the British Ironwork Centre have announced a new partnership to create a Schools’ Ocean Trail which will highlight the importance of protecting our oceans and marine life. As a part of the Council’s Sustainability project, the Schools’ Ocean Trail Project will help to create further awareness and to better educate school children in the borough.

Every day, ocean and marine life are exposed to a number of hardships, many of which are directly impacted by humanity. With eight million metric tons of plastic entering our ocean every year, 80% of marine pollution coming from land-based activity, over 300,000 dolphins and porpoises killed by discarded fishing nets each year, and our coral reef on the brink of extinction, among many other shocking statistics, it really is time that we all step up to better protect our ocean.

Projects, like this one, can help to give children and young people the knowledge and tools necessary to make a real difference to our future environment.

This partnership between the Council and the BIC comes in the same year that Telford welcomed the iconic Knife Angel, who was created at the BIC and resides at the Ironworks Centre when it isn’t travelling as part of its National Anti-Violence Tour, to the town centre.

The School’s Ocean Trail project will feature 30 fish sculptures which have been made at the BIC are have been primed and readied to be painted/decorated by school pupils in Telford and Wrekin.

Each participating school will paint/decorate their own fish using their chosen design.

Once the project is completed and all of the fish have been decorated, the plan is to create a sculpture trail at Telford Town Park. The trail will then allow people, young and old, from all over the country to reflect upon the way we interact with our ocean.

Last year, Telford & Wrekin Council declared a climate emergency, acknowledging the seriousness of the issues around climate change both locally, nationally and globally and committing to tackle them locally. The Council has committed to go carbon neutral by 2030.

Councillor Carolyn Healy, cabinet member for Climate Change, said: “We are so excited about this new project, in partnership with the British Ironwork Centre.

“This will be a great opportunity for school pupils across the borough to learn about the impact we are all having on our oceans. Even living this far from the sea, our actions still have an impact on marine life and those impacts will affect all of us.

“I would like to take this opportunity to thank the British Ironwork Centre for providing these fish to us for this project and can’t wait to see what the finished Trail looks like next year.”

Clive Knowles, Chairman of the British Ironwork Centre, said: “We are really pleased to be working in partnership with Telford & Wrekin Council on this project.

“This marks one of several new climate awareness projects we hope to conduct alongside Telford & Wrekin Council, now and in the future.” 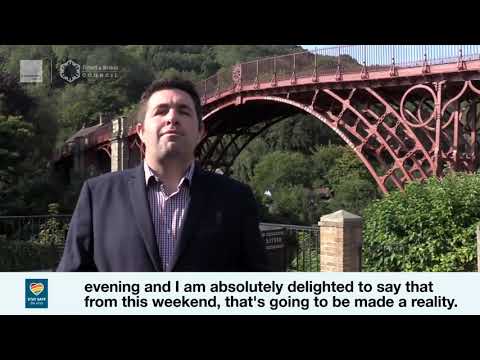